The properties of Frankincense

Medical Disclaimer: Information on this web site is for entertainment purposes only. This information is NOT intended as medical advice or for use as diagnosis or treatment of a health problem or as a substitute for consulting a licensed medical professional. 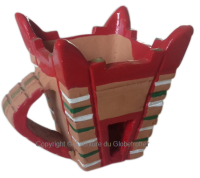 The use of frankincense

The use of frankincense as a natural resin is very often mentioned in written sources, whether they are works relating to ancient languages, medical treatises, geographers’ accounts or poetic and literary works. The first traces 15 of its use go back 4000 years. Furthermore the Arabian incense trade would have developed 15B between the end of the Bronze Age or early Iron Age. This resin was burned both in a domestic and religious context, from Mesopotamia to Rome. This resin is best known in the Western world for its association with the three wise men who offered Jesus the three precious gifts : gold, frankincense and myrrh. Incense in Oman is considered a status symbol.

Much research have been done 15C , some are underway to truly determine the therapeutic virtues of this product, as well as its ability to cure for example cancer and rheumatism. These virtues are not simple assertions without foundations..15aa These are virtues discovered by Hopkins University in the United States and by Qaboos University in Oman. 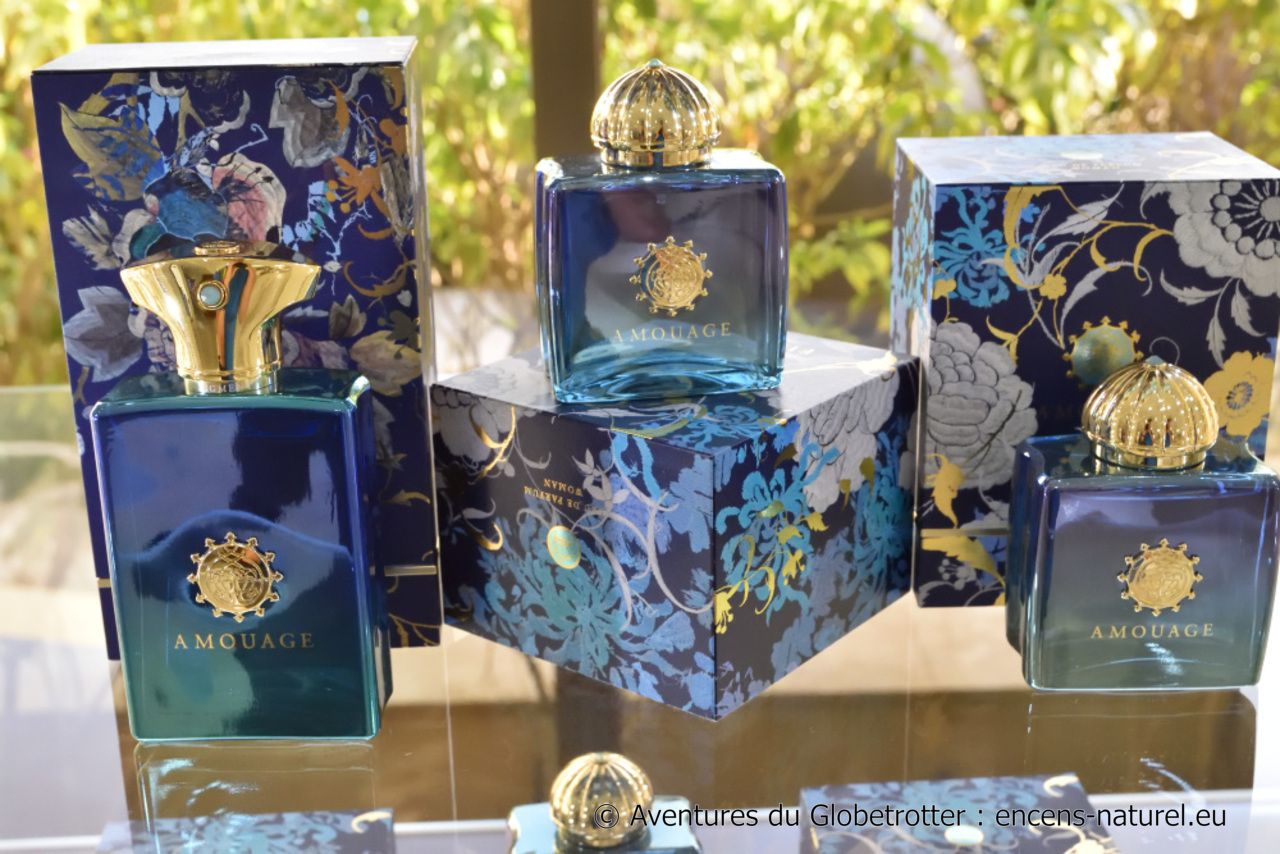 The culture of perfume

In Islam, incense has no liturgical role. When incense is used in mosques or at family ceremonies, it is only as fragrance: that is, it serves neither an offering nor an intermediary.15A In the Sultanate of Oman frankincense is burned daily to welcome guests, to perfume clothes, spaces of house or used at family events, the frankincense is burned just before the ceremony, a birth for example, among other uses. Usually the infrankincensecense is consumed in a ceramic perfume burner typical of the Dhofar region.

However, frankincense is the essential ingredient of Oriental fragrances. Because of its unique aromatic fragrance16A , it is used by the great perfumers when composing a perfume. In the West it is mainly used by the perfume industry which exudes the value of its aroma.

At the heart of the Omani identity, the perfume is a real emblem of the Sultanate. The perfume is here of cultural order, deeply anchored in the society and its customs. His majesty Sultan Qaboos is also the "origin" of the famous perfume created in 1983. The company's first fragrance, called "Amouage Gold", was created by Guy Robert. 16 « Amouage ». A compound of about 130 ingredients, the most subtle and rare are used in the manufacture of Amouage perfumes including frankincense and myrrh.
Another fragrance from Oman is also very important. On the slopes of the Jebel Akhdar region the roses bloom in abundance. The geographical conditions of the Jebel Akhdar mean that roses bloom only a few weeks in April, but the short season gives roses intense and dynamic fragrance, which increases the value of rose petals and rose water. Rose water, is an important cultural site in Oman. It is traditionally used for religious ceremonies, food, cosmetics and as a perfume. 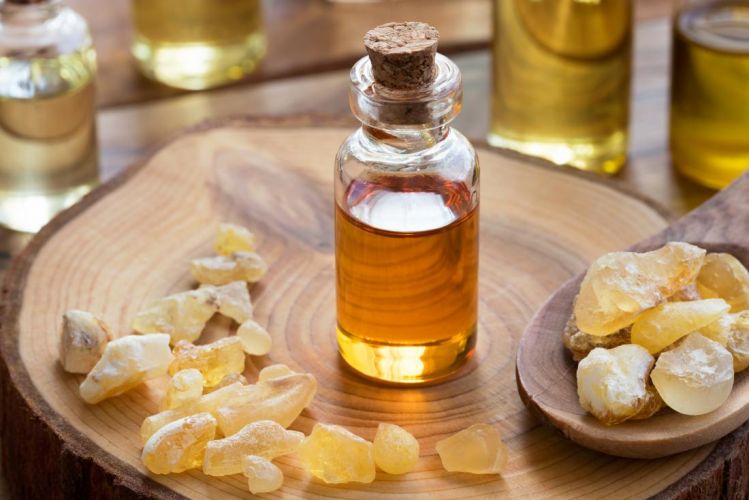 If spiritual use of frankincense is ancestral, it is the same for its therapeutic principles 17 found in ancient documents of civilizations of the Middle East 18 . In India, Ayurvedic medicine treatises place a lot of emphasis on Boswellia resin. It was the same with the Greeks and the Romans. In the 1980s, 19 - 20 the therapeutic properties of boswellia resin became increasingly relevant to science. By the end of the twentieth century, Western researchers have highlighted some of these principles of Boswellia resin (sacra and carterii) 21

The active ingredient is contained in the resin and not in the smoke. The smoke contains components of the bosweillia resin but not enough to have a real therapeutic influence. It is the boswellic acids in the resin which are the active principles and develop, among other properties, an anti-inflammatory aspect. 22 An in vitro experiment carried out by a researcher from the hospital in Hamburg (Germany) showed that frankincense could be beneficial for inflammatory and especially rheumatic diseases. 22A - 23 . Other research shows that it could prove valuable in the fight against cancer. 23A - 24 - 24a - 24B More and more medical science is interested in these boswellic acids 24C - 25 derived from this resin and other therapeutic properties 25A . This open a promising path for future drug applications.

Used in the form of essential oils of incense, other traditional therapeutic properties can also be mentioned :
Anti-infectious respiratory tract, joint and muscle pain, Antidepressant, 26 helps the functioning of the digestive system, Asthma...27

Other references on the Boswellia incense tree. 28

Although it has many advantages 31a , it is important to recognize that the quality and purity of the essential oil have an important role in its therapeutic value. Its therapeutic properties 31 are different depending on: climate, harvest conditions, geographic source and the distillation process.

Sacra frankincense oil is used cosmetically to nourish and rejuvenate the skin. It acts as a skin support as for hydration, irritation and skin rejuvenation and helps the scar tissue. Sacra frankincense essential oil is also widely used to help reduce pain and minor inflammations related to headaches and general muscle tension and arthritis because it contains large amounts of alpha-pinene which also gives it a ability to act as an anti-inflammatory. 29A - 29

It can also provide respiratory support, helping to eliminate congestion and mucous membranes. It helps reduce stress reactions and negative emotions. It also has an anti-microbial effect. 29B 29C

When applied directly to the skin (due to its high concentration), an essential oil must first, sometimes, be diluted with a carrier substance, such as coconut or almond oil. It may also be intended for combustion in order to promote a meditative situation.

The most effective way to use the essential oil is by external application or by inhalation. 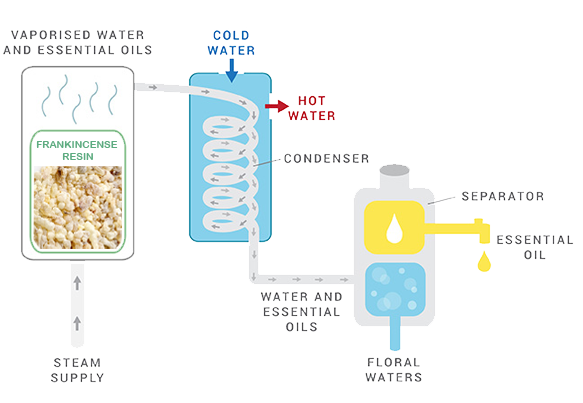 The resin (Bosweilla sacra) is rich in essential oil, it contains in proportion 5% to 10%. It is a volatile, aromatic and concentrated liquid obtained from the resin collected in the Dhofar. The extraction method is made by hydro-distillation. (Water steam). It is the main and traditional way of extracting essential oil.
A clean, natural method, but this technique quickly shows its limits when we want to extract "fragile" molecules that will not withstand high temperatures.

Boswellia sacra essential oil is mainly composed of monoterpenes: (α-pinene, α-thujene, limonene). 32 - 32A However, certain elements such as, for example, triterpenes (such as the boswellic acids 32b known 32B for their anti-cancer action) would be too heavy to be assimilated by hydro-distillation at a high temperature. Nevertheless, the debate remains open... 33 - 34

In general, when boswellic acids are present in frankincense essential oil, this implies that another method is used: CO2 extraction 35 . This method has a high cost, but does not distort the components of the plant, because they are heated to moderate temperature. Plant extracts are very pure, delicate and precious, CO2 extracts are very appreciated in perfumery, and in particular in luxury perfumery.

Frankincense honey35b , or olibanum honey or boswellia honey, is one of the rarest honeys on earth.
The honey is produced from the nectar of incense trees, which the bees (Apis Florea bees)36b collect when they pollinate the incense flowers!

This activity does not harm the trees; in fact, it helps them to reproduce and increases genetic diversity. Therefore, the production of incense honey actively supports the health of the tree populations, while allowing us to enjoy the benefits of incense without having to harvest the trees for the resin.

Boswellia sacra has tiny yellowish-white flowers, gathered in tight auxiliary clusters consisting of five cream-coloured petals, ten stamens and a nectar disc surrounding the ovary. The nectar is sweet enough to attract local dwarf bees and other visitors. The fruit is a capsule that releases its seeds through 3 to 5 valves.

In Oman, the flowers bloom once a year, in April-May. The flowers of Boswellia sacra (Burseraceae) have a conspicuous nectary disc that changes colour from yellow to orange and red as the flower develops. Honey bees are called Nahlat, which literally translates as God's gift. 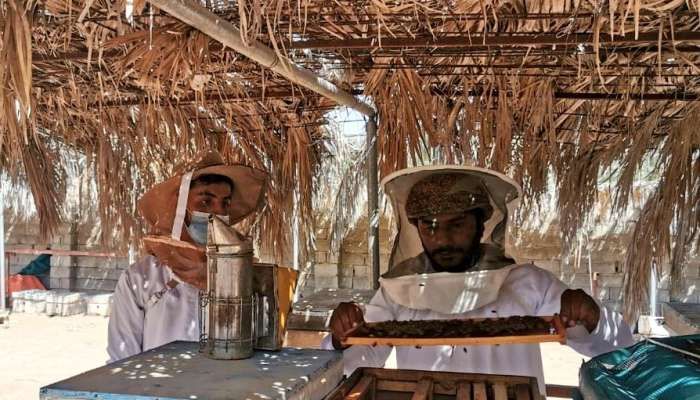 Their honey is harvested from the mountain wadis of southern Oman. A wadi is a valley formed by drainage streams, but differs from river valleys, or gullies, in that a wadi is usually dry all year round, except after a rainfall.

Honey contains small amounts of boswellic acids, powerful anti-inflammatory molecules. And although pure frankincense essential oil mixed with honey is used successfully in alternative medicine, eating frankincense honey is not a cure. However, it is an extraordinary food that will keep your body healthy and prevent potential illness. Small amounts of a remedy will act on the principle of homeopathy and keep your body on guard.

© 2021 All rights reserved. Adventures of a Globetrotter