The history of frankincense of Oman 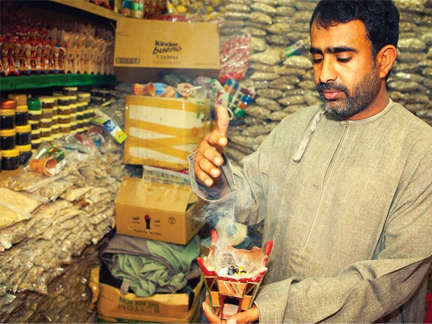 Aftab H. Kola invites us to the land of incense to shed light on the fragrant cultural history of traditional Omani incense burners.

For centuries, the southern part of Arabia has been reputed to be fragrant. Greek, Latin and Arab authors have written tales of a land full of smells and spices. The Dhofar region of Oman has UNESCO `` Land of Frankincense '' status and is known for the high quality gold of its soft golden resin, while the bukhoor (oud) - the indelible scent from Arabia - and smoke from other rich varieties of incense can be found in every souk or local market and in every Omani house, contained in a humble container with a long and equally rich history.

Oman, the scent of incense and bukhoor permeates the air - whether in government buildings, commercial establishments and shops. Omani houses are censored daily, with traditional traditional incense burners smoldering for emanate their sweet and flourishing scent throughout the space.

Incense burners (also known as majmar) have even been immortalized in sculpture across the capital and are an integral part of Omani tradition. Considered a regular household item, the thriving industry of Incense from Oman also encouraged local businesses to make the containers in which it burns.

A sector that was initially identified as a home-based industry has now broadened its scope through investments in resources that recognize the value of the history of craftsmanship and the socio-economic returns it generates for local artisans in a Sultanate which has always supported its local activities. Arts and crafts. A traditional clay container called a `` censer '' or `` brazier '', the majmar designs are generally decorated with engravings and decorated with bright colors, with different patterns depending on the region in which they are made.

Oman's craft traditions developed the nation's social, cultural and environmental philosophy, with the success of the local incense industry, an example of its thriving popular economy. Also known as almebkharah, the production of majmar is an important part of this artisanal heritage. These elegantly crafted clay vessels have a firm surface that protects the coal and an open space between the metal base and the combustion zone. The traditional burner rests firmly on the surface, supported by sides which prevent the coal from falling. Although improvements to a design have evolved over the centuries, the most recent refinements have been mainly of the decorative variety. Place the golden crystals of frankincense or bukhoor in the burner aroused a refreshing puff of delicate fragrance. While some recent versions have been fitted with electrical fittings that allow the user to plug in and eliminate the hassle of activated carbon or special starter bricks, the old ways of making Omani majmar are as old as the mountains. By using clay extracted from the soil of local villages, the art is similar to pottery, the majmar being prepared on ou Boswellia : anti inflamatoire Boswellia : anti inflamatoire Un laboratoire luxembourgeois vient de mettre sur le marché pharmaceutique un anti inflamatoire à base tdoor ovens and ovens fueled with dried palm leaves fuel.

At the Sumhurum archaeological park in Dhofar, international and local archaeologists were able to recover simple round incense burners in limestone at three or four feet and small classic cubic or rectangular basins. The old incense burners had decorations incised on the surface walls, and the incense burners in stone were in the form of bathtubs with truncated pyramidal bases which supported a tubular parallel tub with various religious motifs and symbols on the outside. incense burners were rough on the outside, they were very functionally efficient - with common materials of the time such as clay, limestone (found in the Dhofar region) and basalt often used.

Majmars are a common item in the market in Oman; the best place to buy these traditional vessels is in the souks - with the Muttrah souk showcasing them in a variety of styles. Popular souvenirs among Sultanate tourists, different design variations may include a silver cup-shaped bowl attached to a silver tray and surmounted by a perforated hinged silver cover that allows scented smoke to enter the area.

Those with a keen eye have probably noticed more than a few large-scale majmar sculptures hidden from view around the capital with the aim of reinterpreting the cultural traditions of the Sultanate in new ways. The most important is a large-scale model of a traditional incense burner that stands as a sentry on the side of Al Riyam Park and is a staple along the Muttrah ledge. The former Majmar roundabout at Wadi Kabir was another testament to the tradition, but was unfortunately demolished a decade ago to pave the way for an overview.